ADC Communication's SPX-MPU board is a MC68302-based controller board for the Soneplex communication product line. This board was phased out around 2005 and large number of them were available on eBay as surplus/salvaged boards. They are still available today (2017), although at a higher price of 15-25 USD.

There are at least two methods of powering up the board:

When power is applied, the status LED on the front panel will turn orange for about 15 seconds and then it will turn green. With a null modem serial cable connected to the front panel DB25 connector, baud rate at 9600, 8N1, the following message will be displayed “ Welcome to ADC: Soneplex Shelf Interface ”, etc

Note: once the board is modified it will no longer referred as the SPX-MPU since it is no longer operated as the manufacturer intended. It will be referred as MPU302 or “the board”.

Perhaps there is a way to upload software patch into the board, but I have no knowledge of it. In the absence of software upload, the most obvious way of changing software is to replace the boot flash with a new set of boot flash. The boot flash are located on the corner of the board above the DB25 connector. UB2 is the most significant byte and UB3 is the least significant byte. For people with the appropriate skill and equipment, UB2 and UB3 can be readily cut out and sockets installed in their place. New boot software can be programmed in an external flash programmer and installed in the sockets. The board will now boot up with the new software. The drawback with this method is that every board repurposed need to remove two flash chips, install two sockets and program two new flash chips. That's a significant effort in time and money. There is another way:

Photo of bootflash replaced with sockets

The programming headers are a pair of flash chips (different manufacturer than the ones soldered on board) with the appropriate boot software programmed and then soldered to the solder tabs of PLCC sockets. This sub-assembly will fit over UB2 and UB3. A single-pole double-throw switch is wired to boot chip select and can select either the original boot flash or the programming headers. 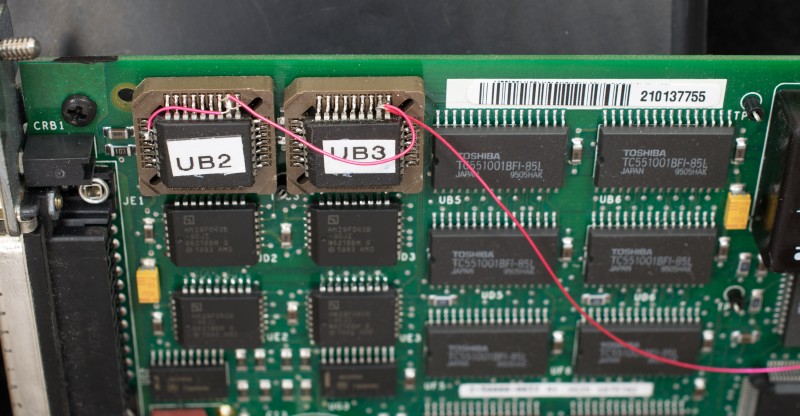 Detailed view of the 'piggyback' of the custom boot flash chips

This method still requires some soldering/desoldering: